Interview: Get Ready for 'My Hero Academia Team Up Missions' 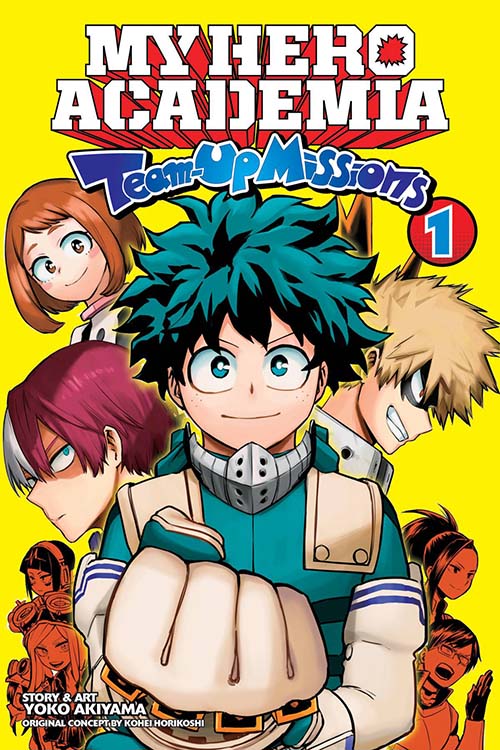 The manga that has taken the world by storm...is about to get even bigger.

The regular, ongoing My Hero Academia series couldn't contain all those quirk-imbued superheroes in one book. So, Viz Media is giving MHA fans a double heaping (possibly more) with MY HERO ACADEMIA: TEAM-UP MISSIONS (JAN211763)! In the following interview, Editor Hope Donovan talks with PREVIEWSworld and gives us a look inside this unique manga spin-off. Keep reading... PREVIEWSworld: At this point, there’s no need for an introduction to MY HERO ACADEMIA, but…what is TEAM-UP MISSIONS?

Hope Donovan: My Hero Academia: Team-Up Missions is a spin-off series written and illustrated by Yoko Akiyama. It centers around a program that prepares the next generation of heroes for real world villain-fighting missions. Random students are paired with each other and with pro heroes to give the students a real-world teamwork experience. Think of the stories as happening in the background of the main story.

Are these random adventures or are they building towards something?

The stories build on each other, though no single mastermind villain or nefarious plot is likely to emerge. Each story can also be read as self-contained. 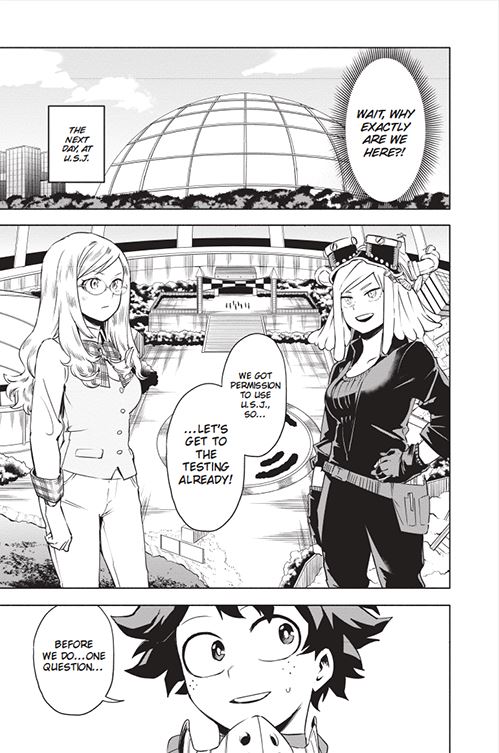 Where does this take place in the MHA story?

The exact timeline isn’t established, but the stories take place after All Might has stepped down from his role as the Symbol of Peace. That places the events of this series after volume 11 of the manga or after episode 50 of the anime (midway through Season 3). Overall Team-Up Missions avoids spoilers, so even fans who haven’t gotten that far in the main story could read without getting spoiled, though they might see characters they haven’t encountered yet.

Any fan-favorite characters we can expect to see?

The most exciting part of the series is that you never know who will show up! Volume 1 contains adventures featuring pro heroes Mirko, Hawks and Fat Gum. One chapter is also the backstory of Melissa from the movie My Hero Academia: Two Heroes. 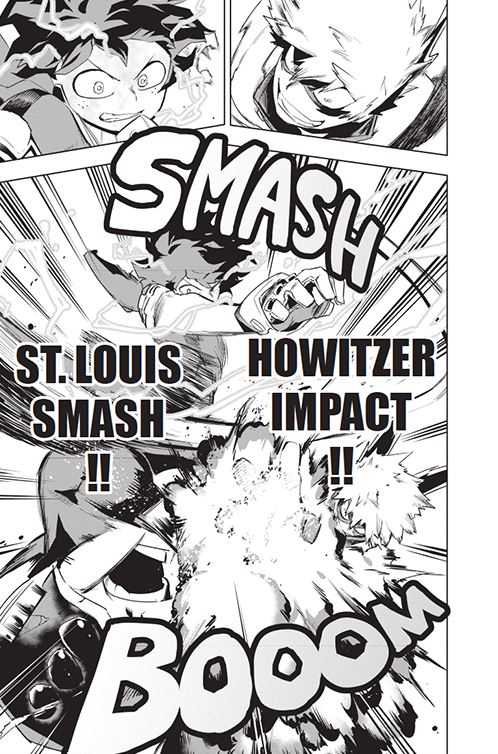 What about locations? Will we get any new backdrops within the MHA world?

Well, if you want to spend some time pigging out in Osaka, the Fat Gum chapter is a lot of fun! Though mostly the stories are set in existing locations.

Can we expect new villains, too?

Team-Up Missions focuses on remixing existing characters, but since the stories are about defeating villains, there’s a new one in each chapter. The author has thoughtfully matched the new villains to particular weaknesses or strengths of the characters they’re paired with, so it’s an interesting read. 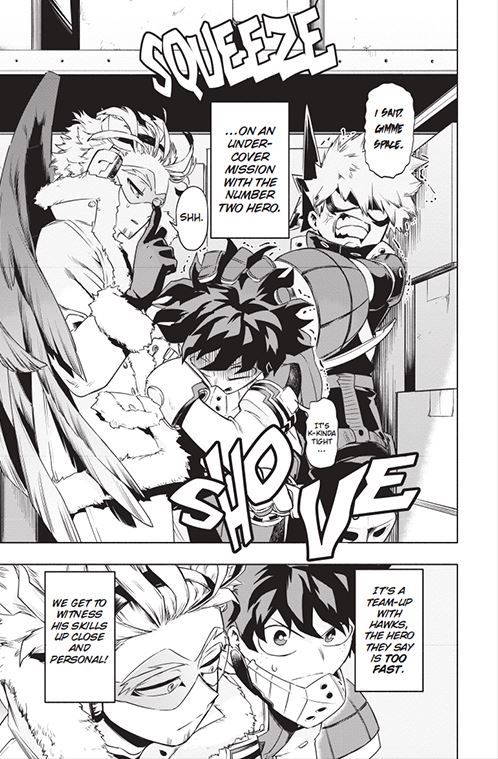 What can you tell us about artist-writer Yoko Akiyama?

Yoko Akiyama is a new creator who previously wrote and illustrated the My Heroine Academia shorts and the 4-volume series Saguri-chan Taikentai (Saguri’s Expedition Team). Her talent and storytelling captivated main series author Kohei Horikoshi, and he writes a glowing review of her series in the author's notes. Her art is remarkably similar to Horikoshi’s!

And this book is coming out monthly?

You can expect once-a-year drops for Team-Up Missions. It’s not a fast series. What’s the process like getting this made for the U.S. audience? Give us a glimpse into editing this for America

This is a work created in Japan, then published in English by VIZ. Main series translator Caleb Cook and main series letterer John Hunt work on this book. There’s the same designer as the main series too. So the only one who’s different is me! However, I previously edited the first spin-off, My Hero Academia: Smash!! and have input on the other My Hero Academia products as well. As the editor on Team-Up Missions, I set the deadlines for the other team members, polish their work, and make sure the book goes to the printer on time. Mostly my editorial work consists of making sure the translation, lettering, and design are in line with the existing My Hero Academia books, as well as being clear and enjoyable. It’s a pretty easy project—much less intense than the frenetic gags of Smash!!

Looking forward, what can readers expect from MY HERO ACADEMIA TEAM-UP MISSIONS?

It’s hard to say, considering only one volume exists, but I’m looking forward to seeing characters from more recent arcs pop up in the next volumes! 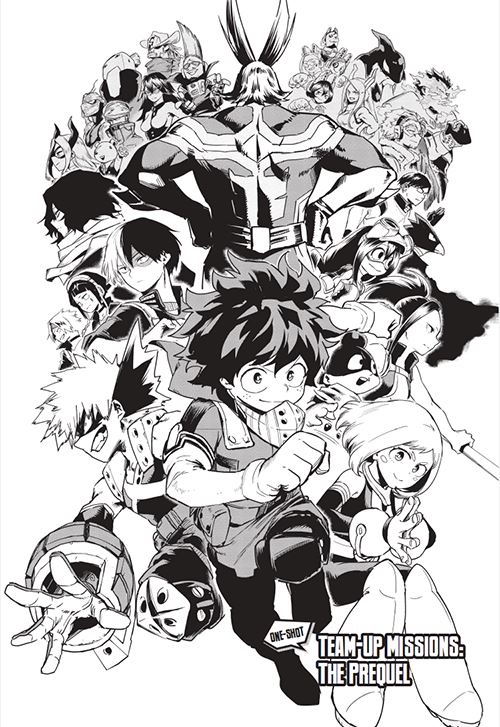 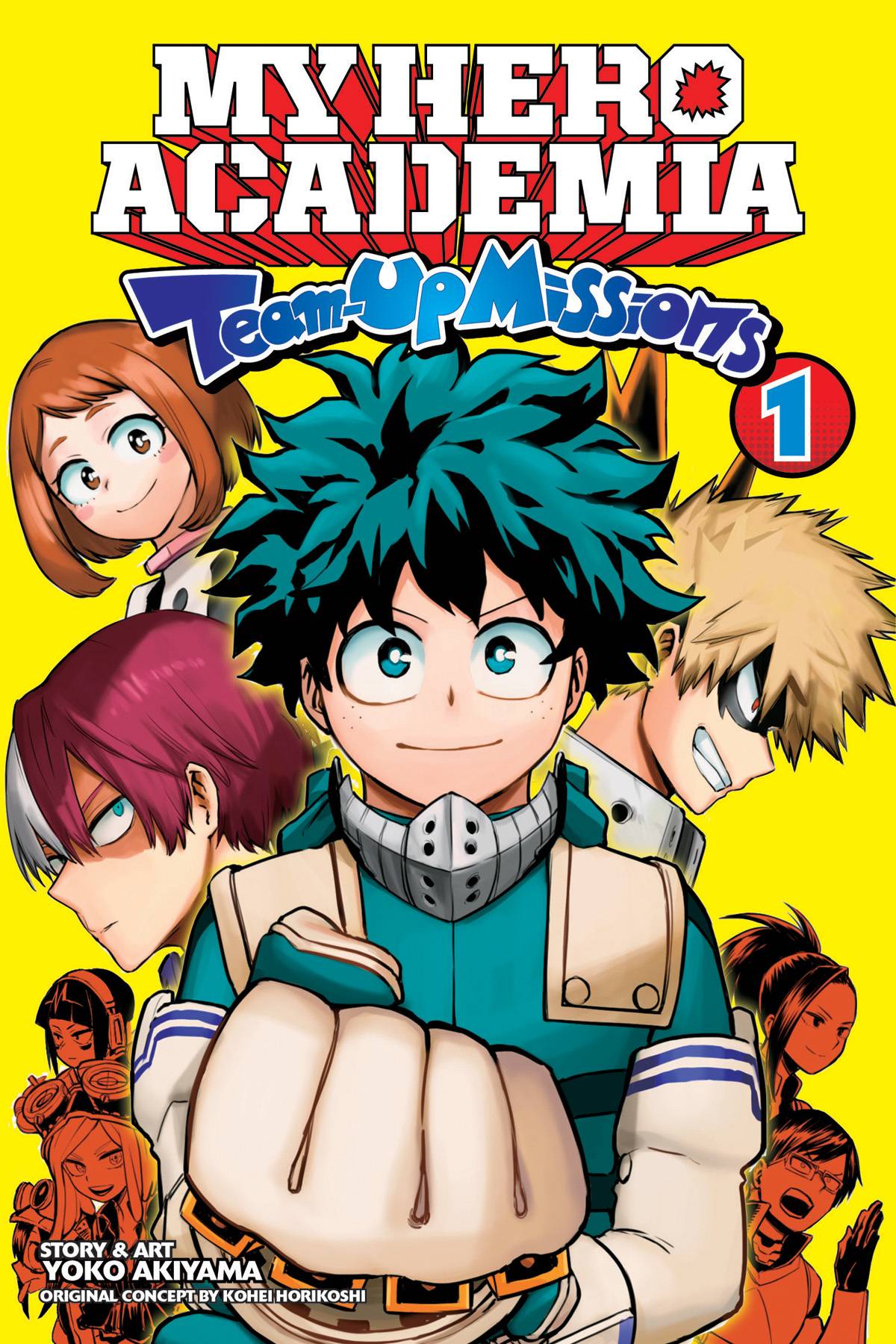 JAN211763
(W) Yoko Akiyama, Kouhei Horikoshi (A) Yoko Akiyama
Midoriya is excited for his first team-up mission until he learns that his team includes Bakugo. Training alongside his explosive classmate would be hard enough, but the pro hero they've been matched with is also a real wild card. Can this makeshift team cooperate, or will Midoriya's first mission be his last?
For teen audiences.
In Shops: Mar 03, 2021
SRP: $9.99
PREVIEWS Page #377 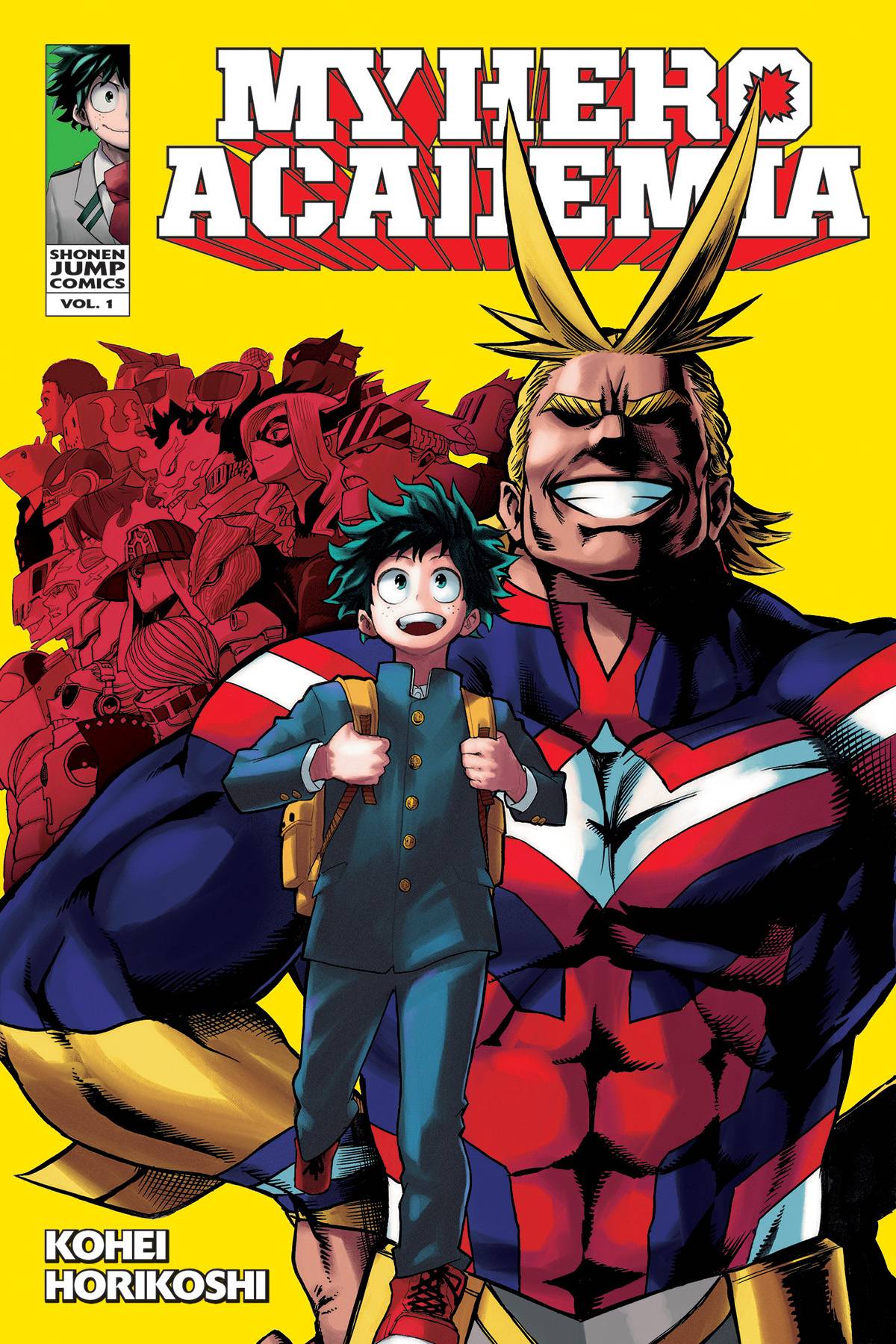 JUN151643
(W) Kouhei Horikoshi (A/CA) Kouhei Horikoshi
Middle school student Izuku Midoriya wants to be a hero more than anything, but he hasn't got an ounce of power in him. With no chance of ever getting into the prestigious U.A. High School for budding heroes, his life is looking more and more like a dead end. Then an encounter with All Might, the greatest hero of them all, gives him a chance to change his destiny...
For teen audiences.
In Shops: Aug 05, 2015
SRP: $9.99
PREVIEWS Page #405
MY HERO ACADEMIA SMASH GN VOL 01
VIZ MEDIA LLC 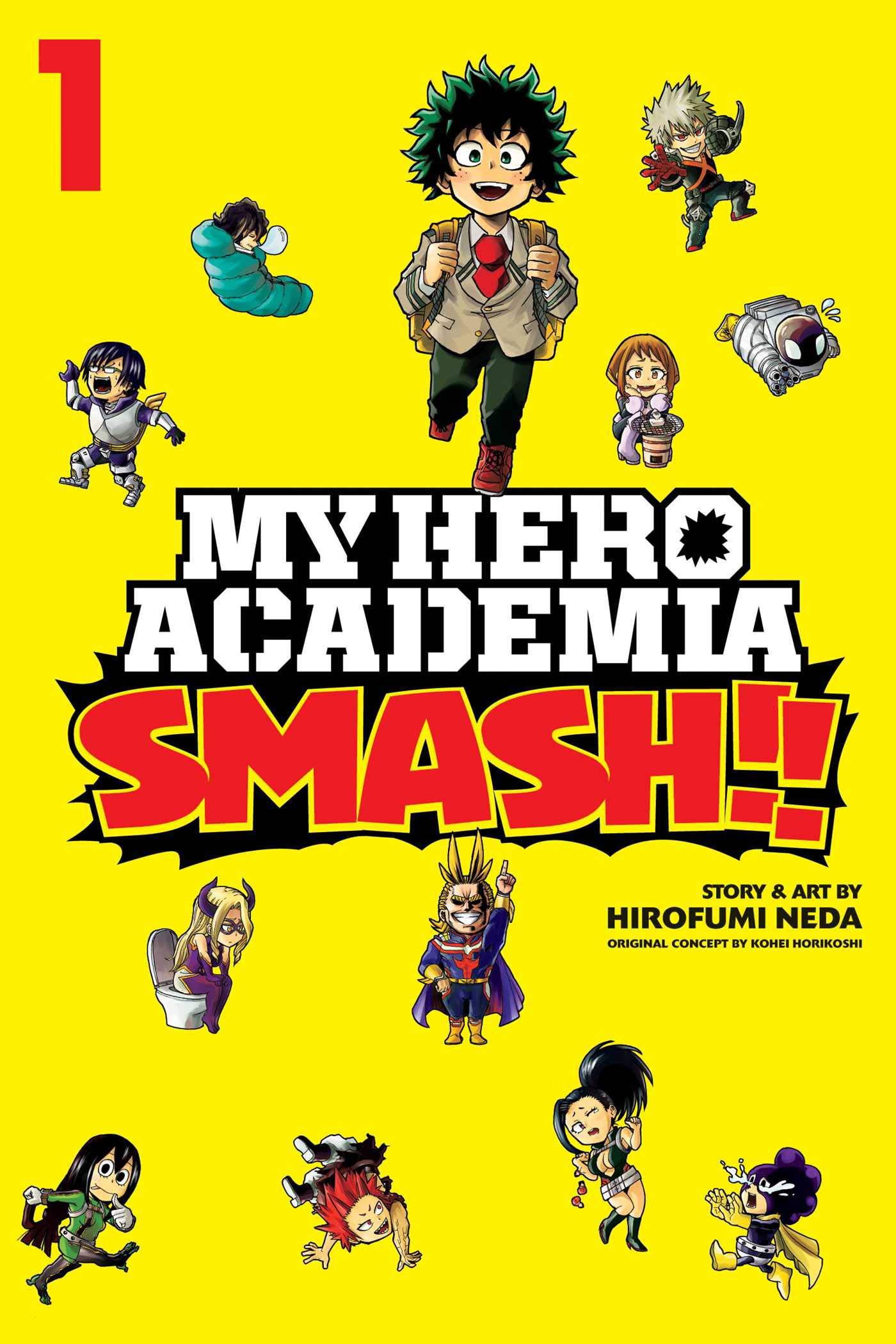 JUN192119
(W) Hirofumi Neda (A/CA) Hirofumi Neda
Listen up! Follow the story of Midoriya, All Might and all the other aspiring heroes of U.A. High, but with hilarious twists! In this first volume, find out how Midoriya really trained to receive All for One and learn the U.A. students' goofy thoughts during their first practical exams...plus, All Might as Santa Claus? What are you waiting for? Start reading!!
For teen audiences.
In Shops: Aug 28, 2019
SRP: $9.99
PREVIEWS Page #408
MY HERO ACADEMIA VIGILANTES GN VOL 01
VIZ LLC MAY182167
(W) Hideyuki Furuhashi (A/CA) Betten Court
Koichi Haimawari couldn't make the cut to become an official hero, so he uses his modest Quirk to do good deeds in his spare time. Then one day a fateful encounter with some local thugs leads him to team up with two other unlikely heroes. None of them really know what they're doing, but they've got the courage-or foolishness-to try. But they soon discover fighting evil takes more than just being brave...
For teen audiences. 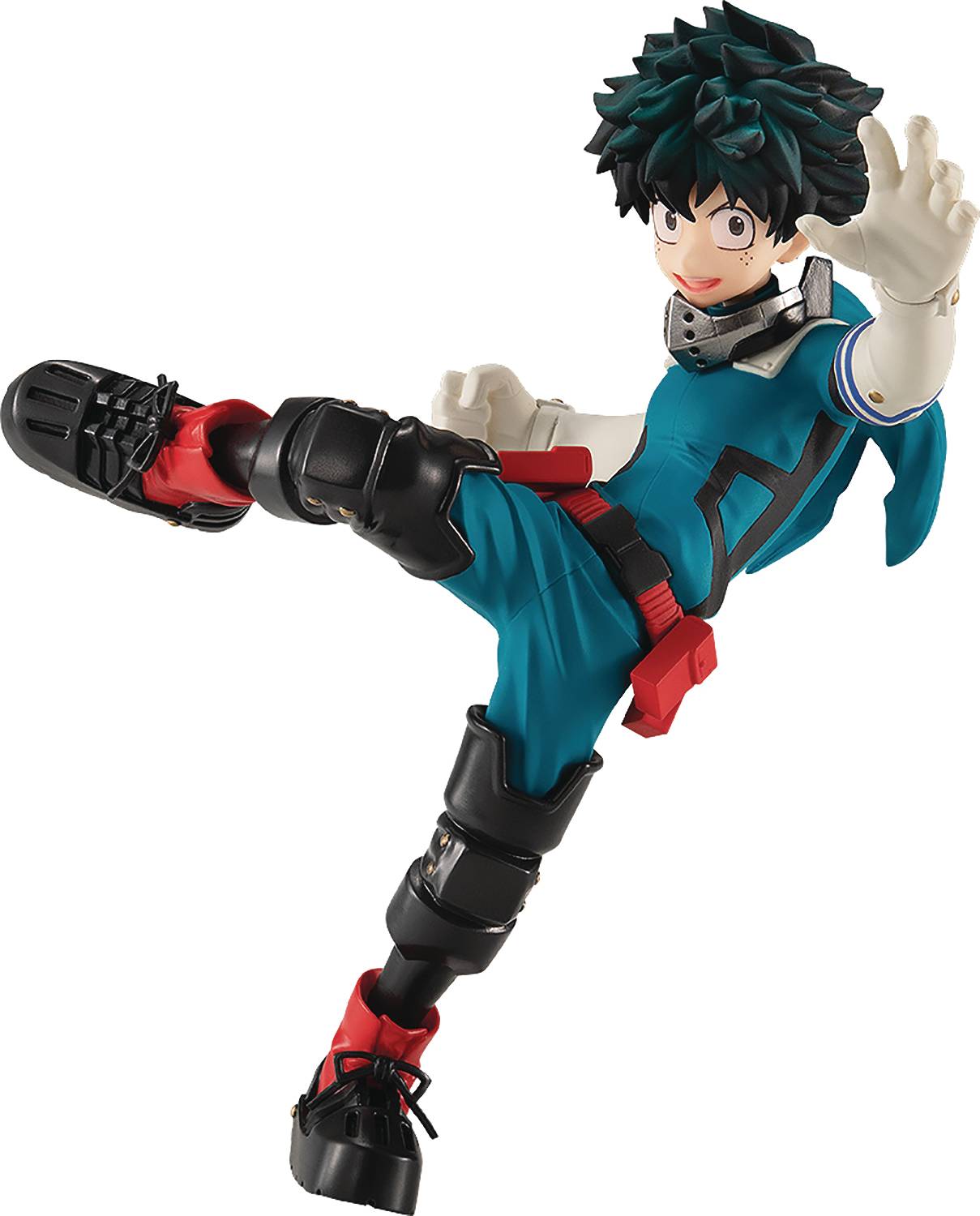 FEB212191
From Takara Tomy. From My Hero Academia comes POP UP PARADE figures of Izuku Midoriya and Katsuki Bakugo in their Hero Costumes! The Izuku figure features Deku right as he unleashes a devastating kick. Collect them both! 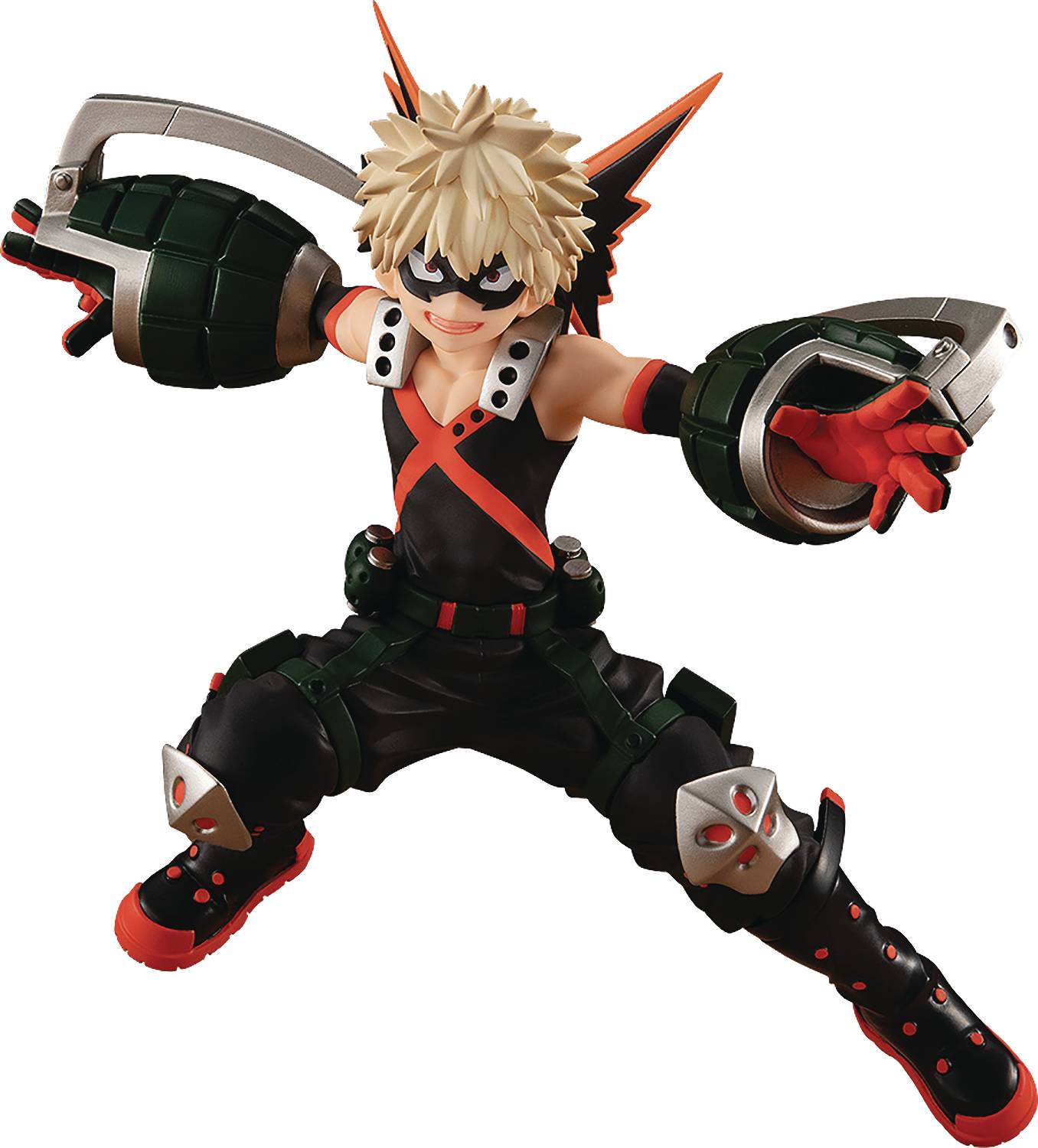 FEB212192
From Good Smile Company. From My Hero Academia comes a POP UP PARADE figure of Katsuki Bakugo in his hero costume! His iconic costume has been faithfully brought into figure form. Be sure to add him to your collection along with POP UP PARADE Izuku Midoriya: Hero Costume Ver. (sold separately)! 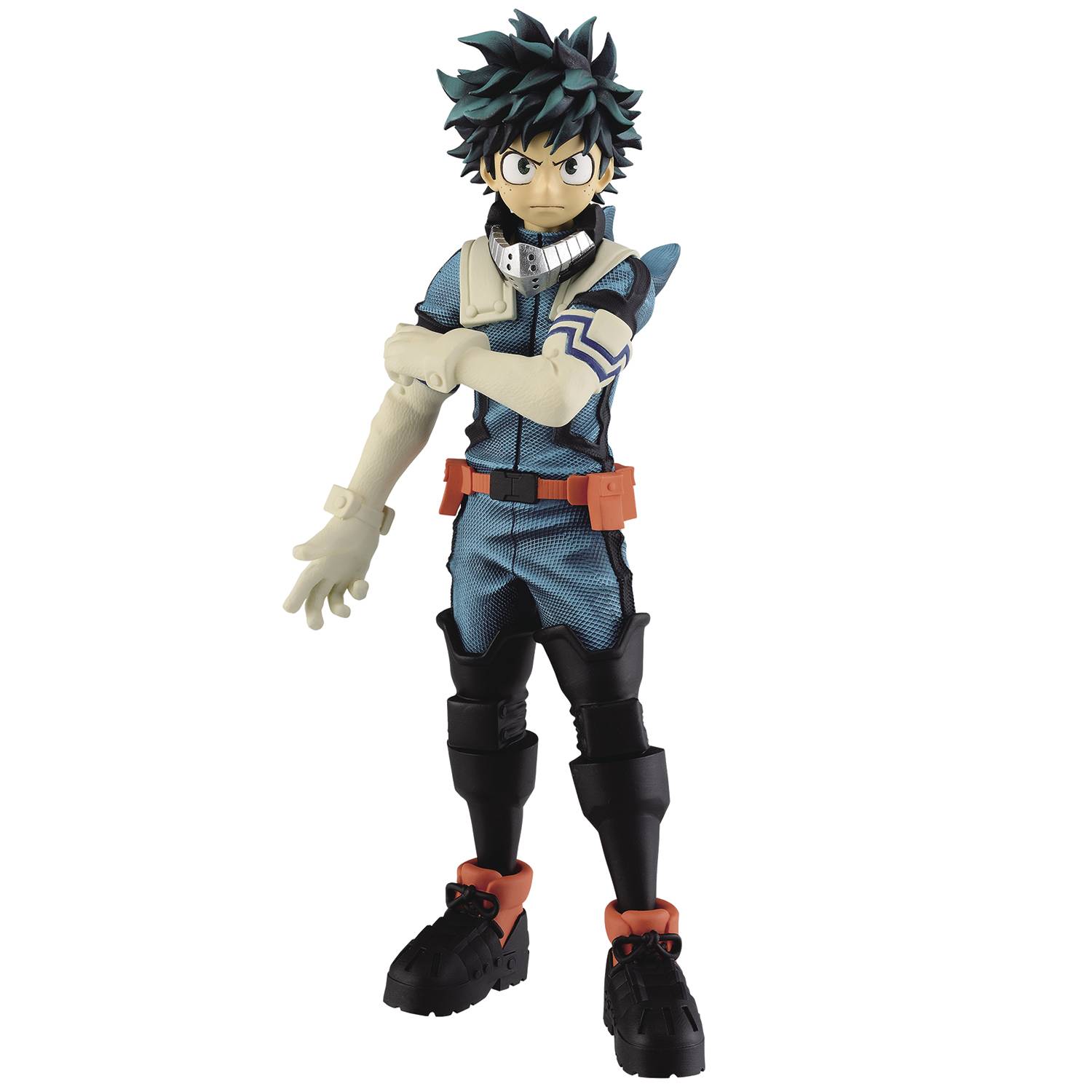 FEB212193
From Banpresto. Kicking off the brand new My Hero Academia Texture line are some of your favorite heroes! Standing about 7" tall, these prize figures of Izuku Midoriya and Ochaco Urarake feature amazing textural detail!

NOV208095
From Takara Tomy. From My Hero Academia comes two new POP UP PARADE figures of Ochaco Uraraka and Shoto Todoroki. Each figure is depicted in costume with a  charming, dynamic pose.

Troy-Jeffrey Allen is the producer and co-host of PREVIEWSworld Weekly. His comics work includes BAMN, Fight of the Century, the Harvey Award-nominated District Comics, and the Ringo Awards-nominated Magic Bullet.